Three days down! Two to go! We manage to finish laying the third layer of concrete block in the foundation. I am thrilled with the determination and tirelessness of the team. I couldn’t ask for a better group of volunteers.

Putting block in the foundation

Francis, Michael and Anthony, from the Habitat office in Kisii, arrive us on site and are quick to join us in our labor. To transport the next round of bricks to the site, we form a line, tossing bricks to one another to cover more ground. I volunteer to be the start of the line – catching is not my strongest asset.

On the site today, it has become apparent that the kids are growing more and more secure with our presence. Lizz and I let our hair down – quite literally – much to the delight of the twelve little girls standing behind us. They smooth our hair, rub it between their fingers, and laugh in that high-pitched way little girls do. I think they are thrilled not just to touch “mzungu” hair, but any hair at all. The kids in this country – male and female – keep their heads closely shaved. This is to keep them cool in the unbearably hot summers and to keep lice and fleas from spreading, as treatments for such pestilence are almost impossible to obtain. I can’t imagine being a little girl without hair to braid, curl and tie with ribbons. 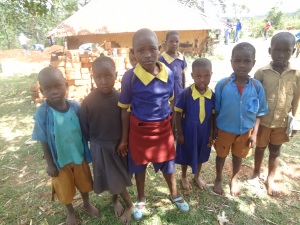 Another group of children

Meanwhile, JD and Eddie teach a group of boys how to play baseball using the handle of a hoe and a ball the kids made from plastic bags wrapped with rubber bands.

I manage to fit in an epic machete shot before the day is over.

I have a machete and I am not afraid to use it.

At the hotel, we experience the first of a three-night event held here every year. It’s a poetry festival that draws people from across the world. We did meet one lady – a professor and published poet from Taiwan. Three students from Kisii University are on the program for tonight. The first is a young man who recites a monologue called “God Made Man First, But He Made Woman to Last.” It’s a tribute to the speaker’s mother, who endured four difficult pregnancies, her husband’s infidelity and HIV. I realize that HIV is a much bigger deal here than it is in the United States. In Africa, HIV and AIDS are as widespread as the common cold. I think that perhaps this is due to a lack of sexual and reproductive education. Most of the audience seem to react with a certain nonchalance at the mention of HIV, as through it’s simply another part of everyday life. I suppose it is, now that I think about it.

Tomorrow, we will leave a physical reminder of our legacy in the foundation. During our dinner, we write individual notes to put into a makeshift time capsule crafted from Gretchen’s water bottle. We will put it into the ground under the foundation for people to open years from now, assuming that it lasts that long.

It’s a sweet and clever gesture, though I can’t help but hope that the legacy we leave is in a house that remains standing for that long; but in the event that our capsule is discovered, people will know that we were here to spread God’s love in the best way we knew how – with our bare hands and the sweat on our brows.